My New Best Friend My Sister.

This is my Dad 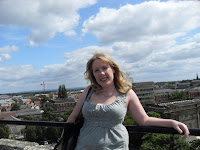 I have found writing this blog has help me understand how I feel about what is currently happening in my life and what has happened in the past.

My father left when I was very young. I had this memory of a man taking me to the seaside and buying me a big teddy. I was brought up by my mum and "dad" who I later discovered was my stepfather not my dad.

At the age of 11 by mum divorced my "dad" and it was at that stage she told me he wasn't actually my father and that my dad was called Norman Webb. Big shock and to be honest at the time it never really sank in. When I was 16 I received by NI card through the post on it was written Angela E Webb, it was at this point it finally sunk in, that I had never known my father and didn't even know what he looked like.

I used to dream an awful lot about, how he looked, what he was doing, if he would recognise me, would he have been proud of me.

My mum refused to talk about the past which made it very difficult.I left home and bought my own house at 19, it was at this point I decided to find my father.

I contacted the Salvation Army they tried but were unsuccessful. I left it a few more years and employed a company called People Tracer. They again couldn't find my father but did find one of his sister's, they had an address and contact number for her.

I wrote a letter and sent some photo's of Isabella and Claudia,at this point it was over 12 years since I had started looking for him. I had no response from the letter I sent.

In 2006/07 not long after Felicity was born I plucked up the courage and called Margaret, my fathers sister. We were talking for over an hour. Margaret said she had not seen my father in years in fact since I was a little girl. Sadly this was not the case.

Me being me, the Internet was growing and more sites were set up to trace family members. I posted lots of messages on so many sites I lost track.

I then stopped for a while as Claudia developed Type 1 Diabetes. I had little time to do anything.

Purdey was born in December 2008, it set me thinking about trying to find my father again.

However the logistics of 5 children and 1 with Type 1 was so time consuming I just never got the chance. Something that I regret deeply and wish I could change.

July 2009 I got a message asking if Norman Webb was my father. I replied giving details etc. I then got a reply saying that sadly he had died, and he had changed his name to David Shaw.

The lady I was speaking to was Lisa, my fathers other daughter. I had a sister(little sis!)

It's nearly 12 months since we first spoke and we have built a relationship. I have a sister, the girls have an Auntie who they adore and Jim her fiancee. What is also special is they have Nanna Irene my fathers wife who has accepted all of us with open arms.

So out of great sadness I have met 3 special people who are an important part of our family life.

Unfortunately they live in Derby and Nottingham, I wish they were closer.

I had always wondered if I looked like my dad. That question was answered when Lisa's mum picked me out of a crowd, having never met me before.

I now have photo's of my dad and have been able to see what he looked like when he was younger.

It's his birthday this weekend. Sending you big hugs and kisses dad. The only peace I have is I feel that there is someone there, looking after Charles and Xavier the 2 little boys that we lost midterm through my pregnancies. They are buried together, but now they have there grandad to take care of them.

To my sister, here is to many years of us sharing happiness together with lots of laughter. Although I wish we had met under different circumstances I am glad you came into our lives.

Dad don't worry as your girls are together at long last. Power to the girls!!

As I am writing this, the tears I shed are of sadness and joy. Sad because I never got to say hello,
joy because I have found my little sis!