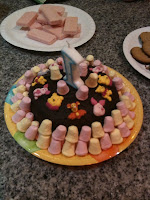 This is one of our gluten free home made cakes.
One of our GP's call us his family of little "autoimmunies"
It was only by a tragic set of events that we discovered Claudia and Isabella had Coeliacs Disease.
By this I mean the day Claudia was diagnosed with Type 1 Diabetes.
Coeliacs is often only diagnosed later in life, when it has already depleted the body of essential vitamins and minerals. It can lead to osteoporosis, bowl cancer, recurrent miscarriage, anaemia to name but a few unpleasant medical conditions.
Every time we mention Coeliacs Disease, we are met with What's that?!! Then oh it's an allergy. No it's an autoimmune disease. Strange how it is linked closely to Type 1 Diabetes another mystery. We feel like the mysterious family.
I remember the conversation vividly. I asked where(diabetes) has this come from, why, what's caused it, there is no family history ?
The consultant asked if there was any family history of Coeliac Disease or Thyroid problems. I knew there was no thyroid problems, but to be honest I had no idea what Coeliacs Disease was.
She briefly explained, it started to dawn on us Claudia had symptoms of Coeliac Disease. She was petite, had a bloated tummy, her hair was fine, she was dreadfully windy and complained that she was tired.
All symptoms that can be typical in children with no sinister reason behind them. We had even discussed her growth with the Health Visitor and they didn't seemed concerned, she had all her health checks. Yet I still keep kicking myself for not realising.
If we had known about the Coeliacs Disease and started a gluten free diet, would it have prevented or delayed the onset of Type1 Diabetes. That is something we will never know.
The blood test was positive for antibodies, normally an ok screen is 3 and below, Claudia was above a hundred. This had to be followed by a biopsy (Gold Standard). We had to attend Alder Hey for this, a different hospital, first time Claudia had a General Anaesthetic and of course the complication of having Diabetes.
At this point Purdey was 5 weeks, I was very emotional. Donald we definitely agree with me.
It was a tough 24 hours and Claudia didn't speak to me for 2 hours after her biopsy. She was cross with me. Although it was peaceful I felt I had let her down.
The biopsy confirmed she had Coeliacs. The gluten free diet began. Yum Yum!
If you have never had the pleasure of tasting gluten free food, here goes, you can bounce the bread rolls off any wall, don't bother to try and make a sandwich, it will taste awful and will have disintegrated before its left the plate.
We were prepared for not allowing them bread, cakes, pasta etc, then came the unexpected, some chocolates, gravy, sauces, some yogurts, in fact the majority of foods when you start to read the labels.
Claudia's birthday sticks in my mind, she could no longer go to the supermarket and select her cake. Something that she really loved to do. Claudia loves her birthday, she talks about it for most of the year. Donald the master baker evolved! He makes a delicious gluten free victoria sponge, pizza bases and bread, watch out Jamie Oliver.
I had one of those mother knows moments, I had a feeling Isabella had Coeliacs too. My consultant said no, she's fine but we will test her anyway. Poor Bella, she has Coeliacs Disease and she loves loves her food. It has been a real challenge.
We have goody two shoes on one hand Miss Claudia and Foodie on the other, Miss Bella.
As a parent you have to be realistic and understanding. Bella got busted earlier in the week, we found a Yorkie wrapper in her lunch box. I never put chocolate in their lunch boxes, but Yorkie's to add insult to injury are not gluten free.
We confronted her with the evidence, at first she tried to deny all knowledge. Then she began to cry, heartbreaking, she said it was unfair as it had previously been her favourite chocolate and a school friend gave it to her. I said you could have said no. She replied but I wanted it.
So we sat down with her and began to explain why it was so important to have a gluten free diet. Lots of tears later there were smiles and I managed to make her laugh. Deep down I agree with her it is unfair, but the parent in me knows I have to educate her well as the long term effects can be devastating.
Today we must thank Coeliac Disease as this is the reason we won our appeal to get her into the nearest High School which happens to be one of the best in the area.
On the funny side, I have never seen my husband taste so many different foods then have to spit them out as in his opinion they taste dreadful.
Donald and I now feel we could be employed by MI5 as we have carried out so many school bag searches etc undected. We have to pretend we have trust and faith in our children to resist the temptation of cakes, biscuits, chocolate and pies,but lets be honest no one is trustworthy were cakes and chocolate are concerned especially women. So the MI5 parents status will continue until they have left home.
Being honest even when they have left we will still be checking!