Claudia has realised that Type 1 is here to stay. 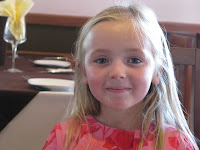 Me Moody Never!
We have had a hard couple of months with Claudia.
Claudia had just turned 7 when she was diagnosed with Type 1 Diabetes, followed by Coeliac Disease. The 1st May 2008 was probably one of the worst days in my life.I thought it was Claudia's worst day, how wrong could I be!
Claudia is 9, 10 next March. Over the last few months we have seen her behaviour change beyond belief. Claudia the peacemaker, the helper, the giggler, the carefree, has virtually disappeared behind the very angry & explosive Claudia." Dynamite on legs with the tongue of a viper" ouchhhhh! I have had such lashings.
It has suddenly hit Claudia that Type 1 Diabetes is here to stay until a cure is found.This is compounded by the fact she has Coeliac Disease.(such a harsh diet) My heart aches as I hear her say, I hate diabetes, I don't want diabetes, it's not fair. As a parent you feel you should make them better. Sadly this is one occasion I can't but thing right. Heartbreaking to say the least.
I know that she will come through this period of anger, I suppose deep down I knew it would happen. I just was not prepared for how angry a little person can get. Oh the temper! I have learnt to duck recently as she is such a good shot when she throws things. In fact World Class.
Strangely she is excited about the Event. I asked her why, as she usually doesn't like to talk about Diabetes. She said: It's because it's going to be fun, no one is going to be asking questions,poking or prodding me, I can just look, take what I want and walk away.
Perhaps that says how much the hospital service affects her, all the questions and testing and as she rightly says, she has no choice.
The dynamite on sticks,with the tongue of a viper, will be wearing black leggings & a pink tutu on the day of the event!
I often wonder, should I let her loose on the PCT 's etc who need to understand how it feels to have Type 1 Diabetes. Sometimes I have such wicked thoughts! On reflection, perhaps that is what is needed for people to sit up and take notice.
Posted by 5 children diabetes, coeliacs and me at 10/04/2010 08:29:00 pm