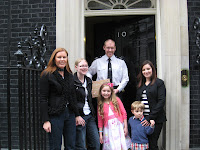 I would like to thank everyone that signed the Petition for Equal Access T0 Insulin Pumps & CGM's(continuous glucose monitor/sensor) It was a privilege for Claudia with Rebekah & Dylan to present the petition on behalf of everyone who signed.

Our journey began on Tuesday, we caught the 9.58am train from Preston, Lancashire. At the same time Sabrina & Dylan were on a different train heading to London. Lesley from Input had said she would love to come and support us. So from 3 different areas of England the Type 1 community were joining forces. True Patient Power!!

All 9 of us met at Whitehall, just outside Downing Street. Wow! is all I can say it was very surreal.
In my usual organised chaos way of managing things, I had no idea what was going to happen!!

So I approached one of the many police officers and asked if we were listed. Phew we were!!!

I have to say a really lovely Police Office said"who is leading this petition"? I found myself raising my hand and shouting me. He said "just pop through the gate" Well when I eventually found the gate and opened it!! Doh !! Easy mistake to assume the gate was at the top not the side. He checked details and then said we could go through shortly.

Our slot was moved forward which was great as we were all so excited, but as a result the BBC camera guy missed us !! gutted. They hadn't promised they would be there, they said they would try.

So 9 of us trotted through the security gates and headed towards an office, that is similar to airport security, bags through scanners and we had to walk through a scanner. Then through the other door and 10 Downing street was in front of us.

Lesley at this point said "I have brought some sashes with Input.me.uk on them, is it ok to wear the"? They were fab! Claudia looked like she was in a beauty pageant.

We took photo's and then Rebekah knocked on the door(Rebekah is 17 with an amazing teenage attitude that makes me laugh so much) stood beside her were Claudia & Dylan. Only one slight problem Purdey wanted to keep the petition box. Only we could have a child that screams on the steps of 10 Downing Street.

A policeman opened the door and took the petition, posed for photo's. We left and went for a coffee together.

If you didn't see the North West tonight interview, a link will be posted shortly on www.diabetespower.org.uk 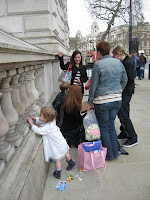 Sorry it took me so long to post but I had a technical hitch downloading the photo's. In other words I had no idea what I was 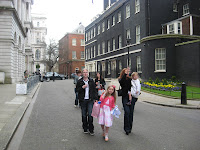